There’s been a lot of talk recently about the potential health risks of exercising while wearing a face mask. The dangers involved stem from decreased oxygen levels and increased CO2. On the flip side, this article from draxe.com details the benefits of Exercise With Oxygen Therapy (EWOT). We can debate the dangers of reduced oxygen during exercise all day. However the benefits of INCREASED oxygen during exercise can’t be ignored or disputed.

Do you know that breathing in higher levels of oxygen will work to improve the health of your blood, cells and microvessels? That’s why hyperbaric therapy chambers have been used for several decades to support the recovery of certain injuries, non-healing wounds and infections. This is especially true when you use exercise with oxygen therapy to increase oxygen circulation throughout the body.

But there’s another kind of oxygen therapy that’s been under our nose for many years now and may be even more assessable than hyperbaric oxygen therapy. Exercising with oxygen therapy is a scientifically proven phenomenon that’s said to restore our natural health to a youthful state. This is called EWOT (exercise with oxygen therapy; pronounced e-watt), and it’s benefitting the lives of so many people.

It’s true that anyone can benefit from restoring his or her circulatory function and blood flow, but exercise with oxygen therapy is meant to increase oxygen circulation at a rapid pace. And although there’s certainly a time and place for hyperbaric oxygen therapy, for the everyday person who is looking to oxygenate blood in their body — thereby reducing inflammation, increasing energy and maintaining health — exercising with oxygen therapy may be more effective and efficient.

What Is Oxygen Therapy?

Exercise with oxygen therapy is when we breathe in higher concentrations of oxygen during exercise. In the past, EWOT utilized low-flow face masks or nasal cannulas that connected to oxygen generators. Oxygen generators are devices that take in room air, compress it and remove argon and nitrogen.

They are able to output 94 percent oxygen, which is more than four times the normal purity of room air. But these original devices only made up to 10 liters of oxygen per minute, which required much more time to see results. The latest developments in EWOT has cut the time to see noticeable results dramatically.

Jason Tebeau, founder and president of EWOT.com, introduced the first open-oxygen delivery system to the market in 2008. His EWOT products have evolved and are now based on the 15-minute Quick Procedure and scientific research of Dr. Manfred von Ardenne, who wrote the Oxygen Bible (a 400-page book entitled Oxygen Multistep Therapy). In his book, von Ardenne uses over 500 medical references and offers scientific evidence based on 10,000 studies to support the use of oxygen to improve cellular health.

Dr. von Ardenne’s research suggests that a phenomenon occurs when you exercise with oxygen. It works to reduce inflammation and swelling of all microvessels in the body.

Imagine all of the pipes in your house have become narrow and can’t get enough water. Everything will eventually come to a screeching halt. That’s exactly what happens when our microvessels begin to narrow — the body isn’t able to get oxygen, blood and nutrients to the organ systems. This restriction causes pain and disease. This is where EWOT comes in and the latest technology called Maxx O2TM.

Hyperbaric Oxygen Therapy vs. EWOT: How Do They Compare?

Hyperbaric oxygen is a medical device that requires a prescription, and it can be a slow process. You do not exercise in hyperbaric chambers. This means that there’s no CO2 buildup to equal the additional inbound O2.

Exercise with oxygen therapy, on the other hand, works to increase your heart rate, allowing you to make more carbon dioxide, increase partial pressure and force more O2 to distal hypoxic tissues. This is a natural process and utilization of O2. Because EWOT increases your heart rate while also increasing oxygen intake, you will likely see results much faster.

Although there’s certainly a time and place for hyperbaric oxygen therapy, as it help such maladies as decompression sickness, fight serious infections, help heal chronic wounds and may even improve neurodegenerative diseases.

Meanwhile, for the everyday person who is looking to oxygenate blood in their body — thereby reducing inflammation, increasing energy and maintaining health — Maxx O2 EWOT is more effective and efficient.

There’s really no limit to the potential benefits of EWOT, but they are all possible because of three major factors: EWOT’s ability to improve oxygen circulation, restore blood flow and increase ATP production. Here’s a breakdown of these three major benefits of exercise with oxygen therapy and how they trickle down to influence overall health and wellness:

1. Increases Oxygen Circulation in the Body

Exercise with oxygen therapy gets oxygen into the arteries, veins and even the smallest capillaries that make up over 74 percent of your circulatory system. By increasing oxygen circulation in the body, your cells are getting the O2 that they need to process the millions of bio-chemical reactions they undergo every day.

According to a 1984 article written by Dr. von Ardenne, improvement of the oxygen flux into body tissues is important for fighting against insufficient oxygen supply, which is a common cause of many diseases, disorders and complains, especially with increasing age.

So why is getting enough oxygen so important? For one thing, research is pointing to a lack of oxygen in the blood (called hypoxia) as a leading cause of many cancers. According to researchers at the University of Georgia, “low oxygen levels in our cells may be a primary cause of uncontrollable tumor growth in some cancers. ” And a study conducted at Washington State University found that when high-pressure oxygen was used on a culture of human leukemia cells, it reduced cancer cell growth by 15 percent.

On top of the increased risk of cancer when blood oxygen levels are too low, research published in Current Medical Chemistry indicates that during hypoxemia, oxidative stress leads to accelerated deterioration, causing our cells to lose their power of division and growth.

The bottom line is that we can’t live without oxygen. And when our cells aren’t receiving enough oxygen on a daily basis, it will affect many aspects of our health.

All body processes require adequate blood flow, but stress and certain medical conditions can disrupt the blood’s ability to release oxygen into our tissues. We know that a decrease in oxygen supply to your blood can severely damage the function of your brain, liver and other organs. We need our blood to carry oxygen to our tissues in order for all body systems to work properly.

This is another major benefit of oxygen therapy. As oxygen circulation throughout the body increases, our oxygen-rich blood is able to send the O2 to our tissues, vessels and organs.

One of the most well-known benefits of oxygen therapy is its ability to improve cerebral blood flow. Research shows that hyperbaric oxygen therapy can be used to contribute to the healing of ischemic ulcerations in patients with diabetes. It’s hypothesized that this type of O2 therapy works to restore vascular activity, and affects the production of vasodilators and vasoconstrictors.

3. Increases the Production of ATP

When you exercise with oxygen therapy, you are allowing every cell to receive oxygen. This increases the production of ATP (adenosine triphosphate), which acts as a source of fuel within the cells.

Mr. Tebeau describes ATP as the “master healing molecule.” By increasing ATP, our blood cells separate so that they’re no longer sticking to each other and can therefore absorb more oxygen. When you make ATP at full capacity by giving the cells more oxygen, “the body can start healing as if we were in our teens,” says Tebeau. But when ATP levels are low, you cannot heal properly or quickly.

All other benefits of EWOT are downstream cascading effects of these three very important factors. Because exercise with oxygen therapy increases oxygen circulation, restores blood flow and increases the production of ATP, it may also benefit the body in the following ways:

How to Use Oxygen Therapy

There are several products on the market today that serve as a source of oxygen therapy. Hyperbaric oxygen therapy is typically available as an outpatient procedure at a special facility. For this form of therapy, you lie down in a chamber unit that’s designed for one person. There are also multiperson hyperbaric oxygen rooms that can accommodate several people at once.

You can also receive oxygen therapy with a mask or nasal cannula that’s connected to an oxygen generator. The generator supplies oxygen that can be inhaled through a tube. However, there’s a problem with these devices because the most powerful oxygen generator can only produce 10 liters of oxygen per minute and we can easily breathe 50 liters per minute during exercise. We need far more oxygen during exercise than any generator can produce. Both of these modalities are slow.

EWOT with the Maxx O2

To solve the problem with older technologies and slower results, Maxx O2 delivers on the 15-minute session. With Maxx O2, a large bag is first filled with 900 liters of oxygen using an oxygen generator. Once full, the Maxx O2 non-rebreather high-flow mask connected to a large diameter hose is used to deliver an unlimited supply of oxygen to meet your needs during the 15-minute EWOT session. The generator is only used to fill the bag beforehand and once you begin exercising, you are only depending on the oxygen inside the bag.

You inhale from the bag and exhale CO2 into the room. The oxygen is HEPA filtered for purity as well. Just one 15-minute session with the Maxx O2 can give you the benefits of dozens of hyperbaric oxygen sessions.

Here’s what you’ll do during an EWOT session using the Maxx O2: 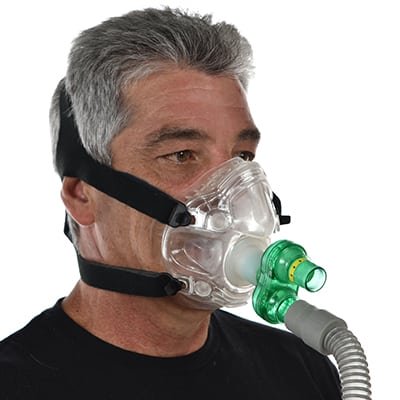 Because you are increasing your heart rate while breathing in oxygen, the O2 circulates within your body quickly. This significantly improves your results and requires less time than other sources of oxygen therapy.

Who is doing EWOT? Anybody can benefit from exercise with oxygen therapy — from top athletes to elderly patients with restricted blood flow. You can invest in your own Maxx O2 system that allows you to use oxygen therapy at home, or you can research nearby EWOT clinics that you can visit for your sessions.

An Altitude Version is also available which offers the user the benefit of switching from 94 percent oxygen to 14 percent (which is adjustable from sea level to 25,000 feet), producing enhanced benefits from the body’s adaptation to exercising at altitude.

Risks and Side Effects of Oxygen Therapy

When done correctly and for no more than 15 minutes at a time, there are no risks or side effects from EWOT. Breathing higher levels of oxygen is considered safe and there is no risk of oxygen toxicity.

For many patients who are just beginning EWOT, it’s the sudden change in their physical activity levels that can lead to side effects. For people who haven’t exercised in a long time and don’t have the physical stamina to endure a 15-minute session, it’s best to begin gradually and consult your doctor in advance.